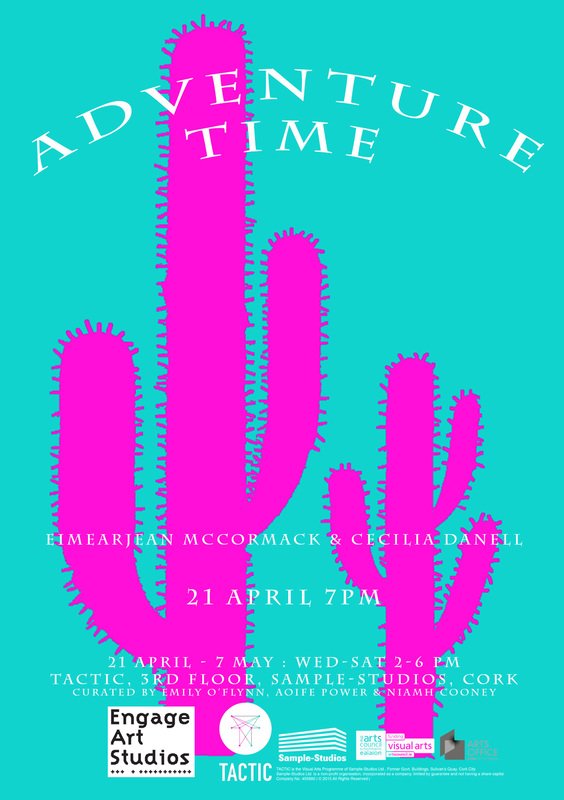 TACTIC and Sample-Studios are proud to present ADVENTURE TIME, an exhibition by Engage Art Studios residents Cecilia Danell and Eimear­Jean McCormack. ADVENTURE TIME is part of a collaborative project undertaken by Engage Art Studios, Galway and TACTIC, Sample-Studios, Cork. This is the second exhibition of the collaboration, “Shills” by Pádraig Spillane, curated by Shelly Mc Donnell, exhibited at 126 Gallery Galway January 2016, being the first.

In 2009 Australian mountaineer Lincoln Hall died at the age of 56. Hall is best known for surviving a night at more than 28,000 feet on Mount Everest in 2006. He’d become disoriented near the summit, and couldn’t move — to the peril of his sherpas. They left him for dead and Hall’s death was announced to his family. But the next day, a group of climbers found Hall sitting up, jacket unzipped, mumbling, badly frostbitten — but alive. He later wrote a book, “Dead Lucky: Life After Death on Mount Everest.”

Danell and McCormack invite us to visit a wonderful, hyper-saturated landscape contained securely within the walls of TACTIC. Presenting us with a post-nature futurology, the exhibition attempts to satisfy our genuine desire to return to nature which has now become skewed by the commodification of the authentic natural experience. Within this narrative we have evolved past luxury safari vacations and the convenience of “glamping”, yet still search to have risk-­free interactions with nature in a controlled, comfortable setting, preferably with candid photo opportunities!