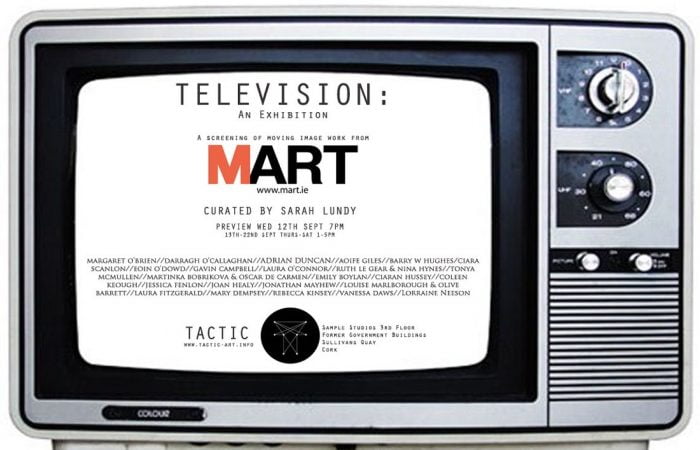 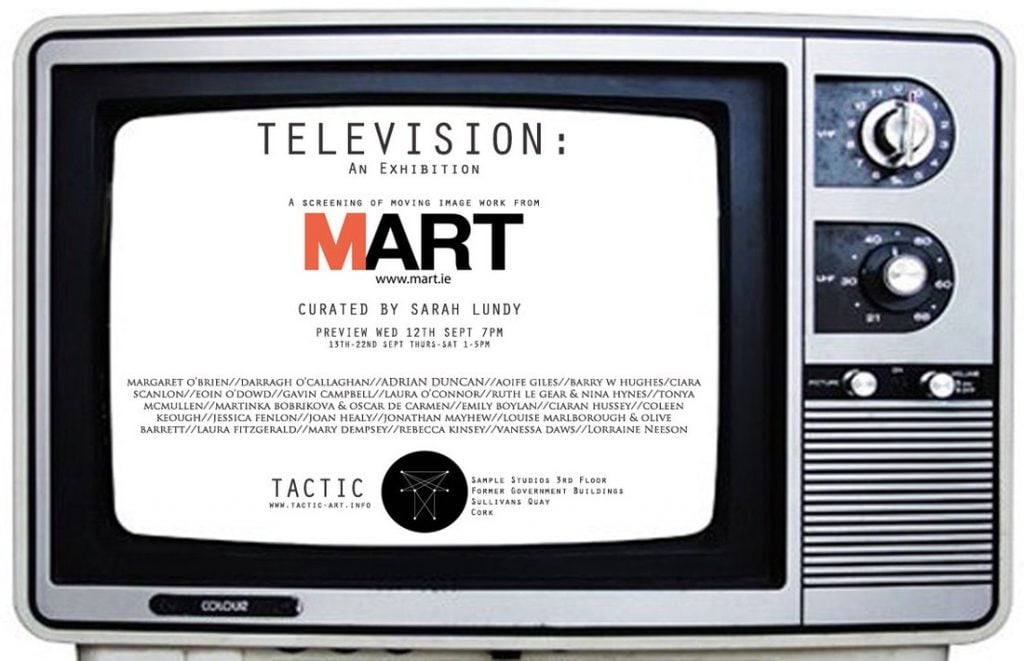 MART is an arts organisation with bases in Ireland and the UK. Their primary aim is to create
a platform for New Media, Installation, Sculpture, Experimental Film, and Performance artists to showcase their work and provide an Art resource that is accessible, interesting and enjoyable to the public.

The concept for TELEVISION: An Exhibition is based on Canadian theorist Marshall McLuhans (1911-1980) studies on media theory and its impact on society, specifically the medium of Television and the notion of media as content in his 1964 book Understanding Media: The Extensions of Man.

In this work, McLuhan coins the phrase ‘the medium is the message’ by which he proposes that the media itself primarily confers content of its own characteristics rather than the content which is transmitted through it. He uses a light bulb as example of this treatise by demonstrating how the bulb itself and its function provide the content of the experience, and that despite being a medium without actual content it produces social affect in terms of environment. When applied to television as a medium then it is the characteristics of the medium and not the content that communicates with the viewer. His 1967 work ‘The Medium is the Massage: An Inventory of Effects’ is a play on the term ‘the medium is the message’ and proceeds to divulge how our sensory and cognitive faculties are manipulated and seduced by the medium and how the viewer identifies with it rather than what it transiently transmits by
way of programming content.

Artist’s use of electronic media, specifically video art and video installation which became prevalent in 1960s & 1970s, demonstrates their adaptation of creativity and concepts to new technologies of expression and media for the dissemination of ideas. Audiences dulled by the generic proliferation of tv output are given relief from this through artists’ moving image works, and set free from the plodding punctuation of typical plot arcs and narrative. Arts constant battle for audience share in the face of ever expanding alternative outlets for
entertainment means that these moves by artists into utilizing new mediums of expression are necessary in order to maintain Arts stance as a viable experience as well in order to question such progressive societal sensations.

If McLuhans theory stands therefore, it has knock-on repercussions for not only artists use of technological media but artists obsession with appropriation, found items and transformed objects. Considering the terms ‘the medium is the message’, this overrides the availability of technology and objects to be imbued with alternative meaning and impact through altering
context, content etc as the format remains the message.

TELEVISION: An Exhibition refutes this whilst leaving the final say to the audience. Composed entirely of moving image work in a series of multi-tv screenings, projections and video installation, the validity of content over medium is made evident in terms of artists distinct use of mediums, whilst paying respect to the medium as vehicle for content.

Following from McLuhan’s expostulation that the prevalence of television has created a connected consciousness, TELEVISION: An Exhibition considers the use of the medium of moving image in terms of ‘the collective’-MART being a collective of new media artists.

Finally, TELEVISION: An Exhibition also endeavours to open discourse on the role of the contemporary art curator within the scope of new media and its frequent metaphysicality. It questions the challenges this presents to the curator in the transferred the onus of occupation of space from the traditional responsibility of the artist now to the curator, and the ever shifting tide-line between the artists and curators input into the display of individual works when work exists in digital dimension independent of physical form and how application of form can alter both the aesthetic and conceptual impact of same.