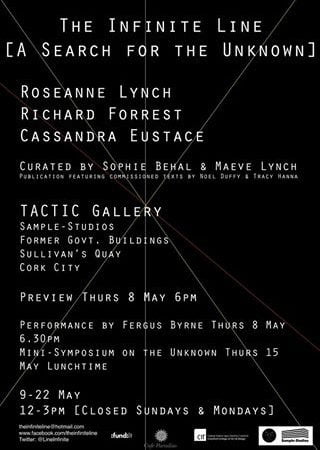 Sophie Behal & Maeve LynchBehal & Lynch both hold First Class Honours Degrees from the CIT CrawfordCollege of Art and Design, having graduated in 2012. As well as workingindependently as practicing artists they regularly collaborate on publications,curation and one-off events. Including most recently an exhibition in the CITWandesford Quay Gallery, Cork City, i’ve started so i’ll finish and a student eventSpace and Ladders at Lismore Castle Arts, Lismore, Co. Waterford. They aim topresent contemporary art as a multi-disciplinary cross over.

Roseanne LynchRoseanne Lynch uses photography and installation as vital elements of her artistic practice. Her practice explores ambiguities within the implied space of thephotographic image. Her works generate an attentiveness of experiential encounter for the viewer; in relation to objects, light, and the viewer in site and space. The photograph as object, the materiality of that object and of the subject depicted, including an understanding held within the unknowing are among her areas of exploration. Her Masters by Research, completed in 2010, placed her practice within phenomenological discourse regarding the corporal presence of looking. Her work has been exhibited nationally and internationally.She received the inaugural Alliance Francaise Photography Laureate Award in2011. Roseanne lectures in Photography at CIT Crawford College of Art and Design and at Cork Centre for Architectural Education. She is represented by Mark St.John Ellis, of nag Gallery, Dublin. She has just been awarded a 2 year artist residency at Cork Centre for Architectural Education. Richard ForrestIn his work he investigates information systems such as the brain and computer. He is concerned with discovering and manipulating the inbuilt tools these systems use to interpret their environments. By deconstructing how these biological and digital systems operate he wishes to investigate their boundaries and explore unknown areas. Through the understanding and manipulation of these information systems he wishes to get a better comprehension of their limits and investigate some of the cultural, technological and environmental forces that shape our reality. To understand this new information he often implements ideas and methodologies from fields such as mathematics, science, psychology and philosophy – it is in the intersection of these disciplines that the work evolves.Richard Forrest, born 1988, Co. Cork, is a practicing artist and is currently based in Dublin. Forrest graduated in 2011 with a First Class Honours Bachelor of Arts from CIT Crawford College of Art and Design, Cork. For his exhibition in the 2011 CCAD degree show he was awarded numerous prizes of note. He is a founding member of Sample Studios, Cork. Forrest has exhibited throughout Ireland and has had works and projects included in numerous group shows that include: The Black Mariah, Cork, Catalyst Arts Centre, Belfast, Tactic Gallery, Cork, Occupy Space, Limerick, SOMA Contemporary, Waterford, The Crawford Art Gallery, Cork. He recently had a well-received solo show in The Joinery, Dublin. In 2012 he was a prizewinner of a micro-grant at 'SUPPER'. In 2013 he was shortlisted for the Siamsa Tire Emerging Artist Award. Cassandra Eustace‘Not as something is but what it might be,’ is at the core of Eustace’s practice.Drawing makes light visible and these are constant tools she uses for analysing and challenging our endless self-perceptions and circuitous habits. Challenging the concept of being stuck in limiting patterns she uses her materials to reinvent and embrace the potential of uncertainty with no known outcome. Eustace draws from her immediate space expanding from the 2D surface into the tri-dimension.Eustace recently graduated from CIT Crawford College of Art and Design MA in Art and Process. She graduated with a BA (Hons.) Degree in Fine Art in 2012, from the CIT Crawford College of Art and Design, Cork. On graduating Eustace was awarded the Barry Maloney Student of the Year and the Backwater Artists Group Studios in Cork awarded her a six-month residency, the Ciaran Langford Memorial Bursary. She was also awarded the Tyndall Institute Printmaking purchase prize, and the CIT Artsfest Prize. This culminated in her solo exhibition Of light and Structure in 2012 at the James Barry Exhibition Centre, Cork Institute of Technology to coincide with National Science Week. Fergus ByrneFergus Byrne is an artist working in performance and visual arts. He is a member of the Visual Arts Centre in Dublin, Ireland. His practice involves video, drawing,sculpture, writing and performance. For this durational performance, Byrne willengage in a focused period of dance with mobile wooden frame sculptures. Balanceand imperceptible movement are his current areas of exploration with thesesculptures. The result of combining body and frames will be a mutual engagement whereby his movements are influenced by the wood and vice versa. The pace will be slow and sculptural.Recent solo work has been in Unit H, Market Studios, Pallas ContemporaryProjects, Present at Queen’s University, Link Culture Fest, Dublin and The Dock,Leitrim. He performed in John Byrne’s Good Works Black Market International’scollective performance The Art of Encounter at Present, Lisa McLoughlin’s Belowthe Tide(2012) and in Brian O’Doherty’s Hello Sam in Dublin Contemporary 2011.Since 2010 he has curated with Deirdre Murphy the annual performance eventsTransversal at different locations in Dublin.Residency programmes have included Public House, Allen, Kildare (2011),Movement Research/Dance Ireland Exchange (2010), Genesis Project, Philadelphia(2009) and the Irish Museum of Modern Art (2008). 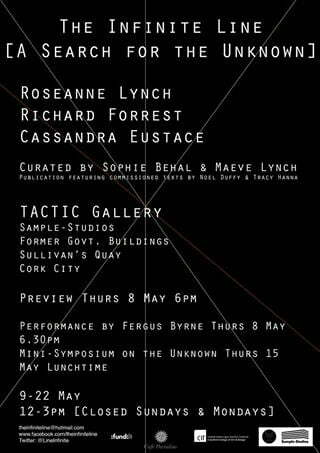 About the Exhibition
The Infinite Line [ A Search for the Unknown ] is an exhibition of new artworks by Roseanne Lynch, Richard Forrest and Cassandra Eustace, which will be accompanied by a once-off endurance performance piece by Fergus Byrne.There will also be a mini-symposium and publication on A Search for the Unknown. The artists work loosely through the medium of drawing in the tri-dimensions and the experiential qualities of light. This is translated
through sculpture, photography, drawing and installation.This show takes as its genesis ideas of spatial and temporal slippage and the
unknown. Our knowing is through our individual perception of things and of our surroundings. Ultimately not knowing is the only thing that we can be certain of. The exhibition questions the things beyond our understanding and the nature of knowledge itself. It deals with knowledge as an unstable ground and precarious truth. The work will explore the unknown from the angles of art, physics and architecture and look at their relationship to philosophical ideas of perception.The publication for the event will feature a commissioned essay by Dublin Based Poet/Physicist Noel Duffy and a paragraph by Tracy Hanna. About the symposium:
The mini-symposium A Search for the Unknown will take place in Sample-Studios auditorium and feature talks and screenings by invited contributors that explore the unknown from various angles. There will also be a conversation between the artists and curators followed by a Q&A session. 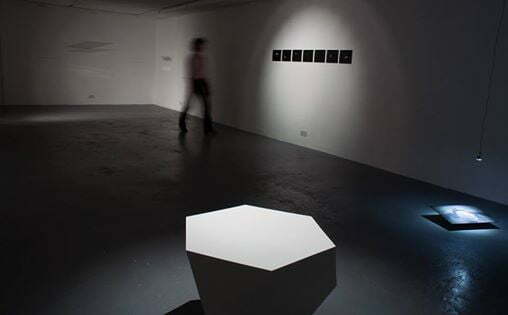 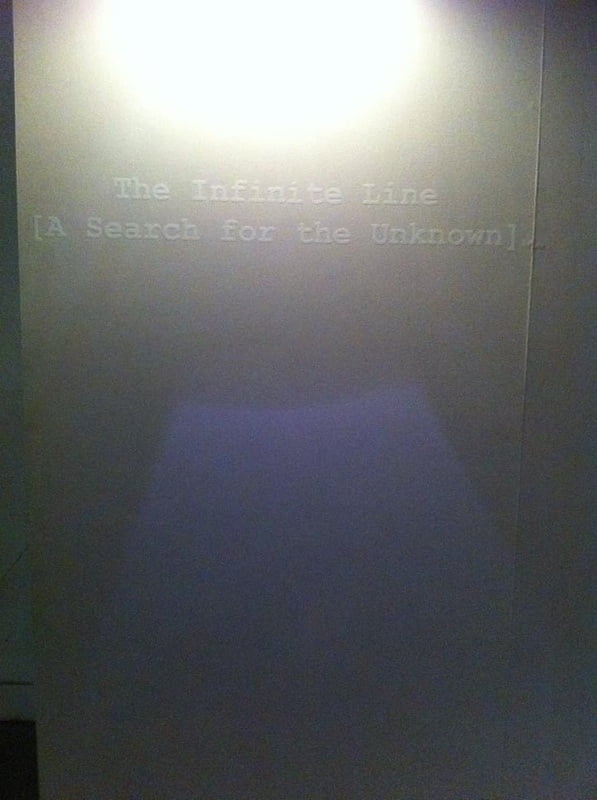 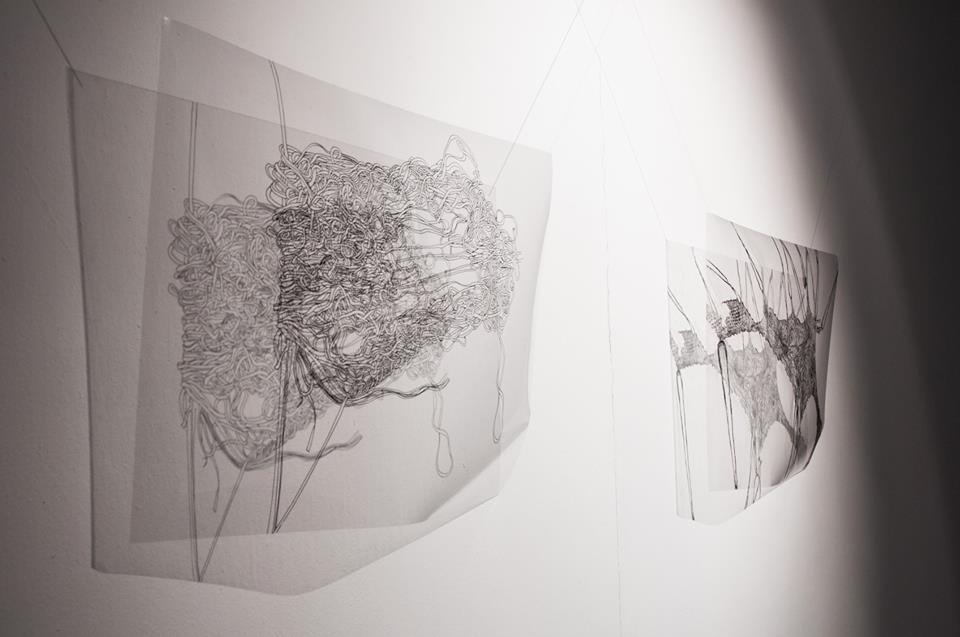